Yamba Fours Championship decided in a great weekend of bowls 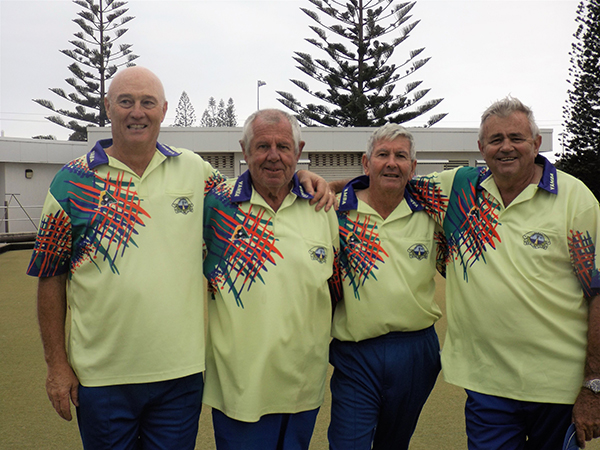 The first championship event of the 2020 bowls calendar was contested over the weekend with the Fours Championship the first to be decided.

The preliminary round on Saturday morning scheduled Alan Turnbull and his team of Steve Cassidy, Dave Atkinson and Paul Conley up against the proficient and tested combination of Nev Hillyard, Brad Wynne, Terry Johnson and Brad Johnson.

Several pundits at the game believed that this match would be a walkover with the 2019 Club and CRDBA Bowler of the Year, Brad Johnson, and his team too strong for their opposition. However, nobody passed the script to Alan and his boys and after fifteen ends the outsiders were ahead 12 shots to 11 and with the game in the balance. However, three ends later and within sight of the finish Brad and his team led 19 to 13 and apparently in control. The final twist in the plot of this dramatic game came as Alan Turnbull inspired his team to collect the necessary eight shots over the final four ends, including a three on the final end, to take the game by 20 – 19.

In the afternoon quarter-finals Alan, Paul, Dave and Steve continued their mission of causing mass casualties across the star field of competitors when they accounted for another elite team comprising Cliffe Vagg, Steve Jackson, Peter Forrester and Ian Parker by 23 – 21 in another thriller to secure a place in the semi-finals.

Jim Johnson and his team of Brett Pingel, Ron Smidt and John Deale took their quarter-final against Peter Julian, John McGovern, Chris Muldoon and Bill Andrews relatively easily by 21 – 12 to earn the privilege of facing the ‘Turnbull Tornadoes’ in the semi-finals. Alan Abbott, Marty Wood, Tony Abbott and Greg Dickman did their best Houdini impersonation to come from 16 shots to nine down with three ends to play to edge Steve Kliendienst, Alan Reed, Paul Lozelle and Doug Howat by 20 – 16. In the remaining quarter-final it was the accomplished and well-tried combination of Graham Meany, Trevor Bardsley, Bob Ballantyne and Allan Parker who found their way past Col Lindsay’s team of Bruce Blanch, Greg Johnson and Ray Schafer to claim the ultimate semi-final position by 22 – 19.

The games on Sunday produced some outstanding individual and collective performances with Graham Meany, Trevor Bardsley, Bob Ballantyne and Allan Parker producing great teamwork to out play Greg Dickman, Tony Abbott, Martyn Wood and Alan Abbott by 24 – 15. The run of wins from championship underdogs, Alan Turnbull, Paul Conley, Dave Atkinson and Steve Cassidy came to an abrupt conclusion when they fronted Jim Johnson and his team of John Deale, Ron Smidt and Brett Pingel and had their scoring opportunities restricted to the tone of a 20 shots to nine loss.

The final produced a masterclass of fours team lawn bowls by Jim Johnson and his side who mastered the slower green, following overnight rain. Jim, John, Ron and Brett displayed an uncanny ability to cover the scoring opportunities of their opponents leaving Graham, Trevor, Bob and Allan in bewildered and perplexed on from where their next score would come. In true championship style, Jim Johnson, John Deale, Ron Smidt and Brett Pingel captured the first championship of the year with an emphatic 24 – 13 win.