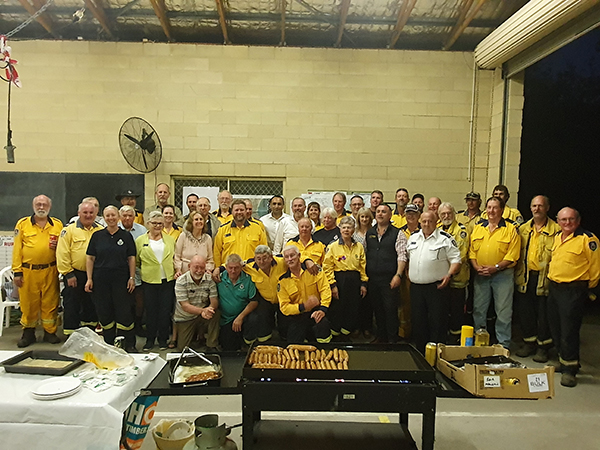 At least nine Clarence Valley RFS brigades attended a BBQ in their honour at the Gulmarrad RFS brigade shed on Thursday evening last week. The event was organised by Member for Clarence Chris Gulaptis and NSW Deputy Premier John Barilaro, to show their gratitude for the firefighters efforts during the recent fires. Image: Lynne Mowbray

The Clarence Valley’s Rural Fire Service (RFS) volunteer firefighters were acknowledged for their efforts during the recent fires, at a low key barbeque and drinks, which was held at the Gulmarrad RFS brigade shed on Thursday October 3.

Member for Clarence Chris Gulaptis was joined by Deputy Premier John Barilaro to personally convey their gratitude to the nine RFS brigades which were represented on the night.

Mr Gulaptis said that it was terrific to have the Deputy Premier come to Gulmarrad to say thank you to the firefighters.

“This is a great day,” Mr Gulaptis said.

“They (the firefighters) do a great job for our community and they need to be appreciated and we’re here to say thank you.

“We really mean it; they’ve saved our community time and time again.

“They put their lives at risk every time they go out to fight a fire and they do a fantastic job,” he said.

Mr Gulaptis said that during the time of the fires, the Deputy Premier flew in to Tyringham by helicopter, to check out the fire situation.

“Even though Tyringham is in my electorate, I couldn’t go and meet with him, as the Armidale Road was cut by fire,” he said.

Mr Gulaptis said that the Deputy Premiers visit on Thursday (which also included other meetings in the local area), was organised at the same time that he visited Tyringham.

“We know that the local RFS really saved Angourie, Yamba, Gulmarrad and they saved a lot of large communities down here and he really wanted to come and say thank you to them,” he said.

Clarence Valley RFS superintendent Stuart Watts said that it was an absolute privilege to have both the Deputy Premier and Chris Gulaptis, come along and support the brigades in this way.

“Without these gentlemen I don’t think the Rural Fire Service would be in the position that it is and there could be serious losses as a result of that. That hasn’t occurred and so it’s a great effort by the State Government,” he said.

Coffs Harbour MP Gurmesh Singh, travelled up to Gulmarrad from Woolgoolga to especially thank the firefighters, as his property was one of the properties that were saved.

“They are only young plants, but obviously we were very concerned about the size of this fire and it getting out of control.

“We were very fortunate that the RFS firefighters were able to bring it under control, with the help of the 737 and a lot of other aircraft.

“As member for Coffs Harbour, we had a lot of Coffs Harbour crews fighting this fire, so I wanted to show my gratitude to the firefighters.

“It can be a thankless task at times. They have to leave their families, leave their jobs, just drop everything and put themselves in harm’s way to try and protect other properties and it’s a fantastic job they do and no amount of thanks will be enough. It was whole towns they were able to save.

“This was a very significant fire and it came close to some really major towns and full credit to the RFS and volunteers and all the hard work that they did to contain this fire. It’s a long season ahead for them,” he said.