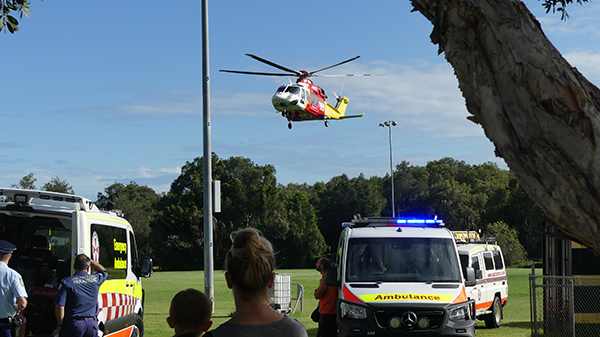 Alerted by the WESTPAC rescue helicopter hovering above Main Beach, Yamba, a throng of people looked on from the cliffs late on Friday afternoon, as paramedics attempted to revive a man who was unconscious when pulled from the surf.

After being stabilised, the man was taken to Yamba Oval by Ambulance NSW.

According to a paramedic on site, the 36-year-old man was in a serious but stable condition when he was airlifted to the Lismore Base Hospital and subsequently on to the Gold Coast University Hospital.

Police were not available to comment on Monday morning before the paper’s deadline.

However, a post by Yamba Notice Board member, Katie Elbert, on Facebook at 8.56am on Monday said the man was still alive.

“This is a message from Claire, who is the sister of Thomas, the man who [almost] drowned on Main Beach on Friday.

“Thomas is alive, but still on life support in the ICU at the Gold Coast.

“Claire and her family would like to say a heartfelt thank you to everyone on the beach who helped rescue and resuscitate her brother on Friday.”

The Independent spoke with two eyewitnesses: Charlie Bindon, who raised the alarm by calling 000, and Marty Dougherty, a local school teacher who assisted with the initial application of cardiopulmonary resuscitation (CPR).

Mr Bindon said he saw the man being “dragged out” of the water.

“He actually went in [the water] mid-beach and because of the sweep [south to north] he ended up around Lone Rock,” Mr Bindon said.

“I saw him, like, head-up swimming and after a big set came through, he went down under a wave and didn’t come back up.

“Then I saw him face down and get dragged along the shelf.

“I was already on the phone by that stage, calling the ambulance.

“Then I raced down and everybody was working on him already.

“I’m not sure who got him in, but as I got down there, there would have been about four people around, bringing him out of the water and starting CPR on him.”

Mr Dougherty said he arrived at the beach after work to check out the surf and that he has been a member of the Yamba SLSC and a lifeguard.

“I was up on top of the hill [and] I saw two or three people in waist-deep water,” Mr Dougherty said.

“I watched for about 30 seconds and thought, ‘this doesn’t look right’, and there weren’t many other people on the beach, so I raced down to the bottom of the hill.

“As I got to him, the two or three [people] who dragged him out were on the rock ledge with him –they’d just sort of got him on top of the ledge and had started their first round of CPR.

“I came in and talked them through it, with three of us rotating with the compressions … one of the people obviously had some CPR training.

“When I got there, I didn’t rush in, I just sort of spoke to them and said my name and can someone tell me what’s going on?’

“It was his sister, I think, who said the guy’s name, his age and that sort of stuff.

“There was another guy there helping with the compressions; he said he was unconscious when they pulled him out.

“The three of us rotated with the compressions until {Yamba SLSC members] Mitch and Clemont arrived; they had the key to the surf club … and they got the Oxy-Viva and the defibrillator.

“We hooked the defib up to him and gave him one shock and then … Mitch and Clemont and I got a bit worried about the tide coming in, because he wasn’t that far out of the water.

“He was pretty quick on the scene.

“…Not long after the first ambulance guy arrived a police officer arrived.

“The helicopter decided to hover above and they winched one guy down first, who helped the ambulance.

“By this time a second ambulance officer had arrived in a car.

“The helicopter hovered for about five minutes and winched two others down.

“He was worked on for at least 45 minutes before they took him away.

Mr Dougherty said he’d stepped back once the paramedics had arrived.

“As the helicopter was hovering, three ladies came down and I think they said they were off-duty emergency doctors and they sort of came in and helped the paramedics.”