To dive or not to dive 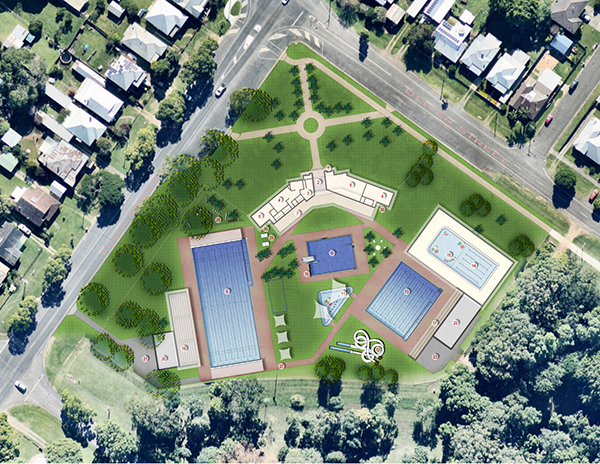 Councillors have rejected Option 1 for the Grafton Olympic Pool Master Plan and, instead, decided to forge ahead with Option 2, which eliminates the dive pool. However, councillors left the door open to reintroduce the dive pool; an estimation construction costs for “a new diving pool and associated infrastructure including towers and boards” will be tabled at the April 2020 meeting. Images: CVC

Clarence Valley Council (CVC) is moving forward with its strategic plan to establish a regional aquatic centre at the site of the Grafton Pool, with or without a diving pool.

At the December CVC meeting, councillors considered a report on the long-term financial plan for the Grafton Olympic Pool Master Plan, which “presented a return on investment analysis, including an evaluation on whole of life costings and associated impacts”.

As a result, it was recommended to councillors to reject the previously adopted Option 1, which included a dive pool and, instead, adopt Option 2, which eliminates the dive pool.

The Liquid Blu report recommended removing the dive pool because retaining it would impact negatively on the “return on investment (ROI) analysis and evaluation of whole of life (WOL) costing” of the master plan design.

Councillor Jason Kingsley said: “What concerns me is we had an adopted master plan; now after consultation we have moved the goal posts and made massive changes to the master plan.”

He said without the dive pool it wouldn’t be “a facility for teenagers” and that they would likely “make nuisances of themselves in the lap pool, doing back flips … [and] doing silly things like diving in shallow areas”.

“You can include five other pools or structures but they will not replace the second most used facility at the moment [the dive pool],” he said.

Councillor Richie Williamson said it was his “personal view that there is no need for a dive pool in Grafton” and it is “used dangerously now”.

Councillor Peter Ellem said that Option 2 “looks more workable overall” and that it was a design that “most other cities would envy”.

Councillor Andrew Baker said that the motion that was ultimately adopted “essentially does too much … but still gives a possibility that the dive pool could be retained”.

“Once we get the information and costs, we can do a back flip or double reverse,” he said.

However, they also decided to seek: “an estimate of cost for the construction of a new diving pool and associated infrastructure including towers and boards”; quotations for the production of the detailed design and associated documentation for the development of Grafton Aquatic Centre; and, government support for the project and to apply for suitable external funding.

Councillors allocated “$50,000 from the general fund to investigate the water leaks, and, where practicable, [to] carry out short=term temporary repairs to reduce water loss to the pool structures and associated services” – this will be subject of a report to the March 2020 CVC meeting.

Results of the dive pool investigation will be tabled at the April 2020 meeting.

Councillors Kingsley and Toms voted against the decision; Cr Clancy was absent due to illness.