Tales of the surfing ‘tribe’ 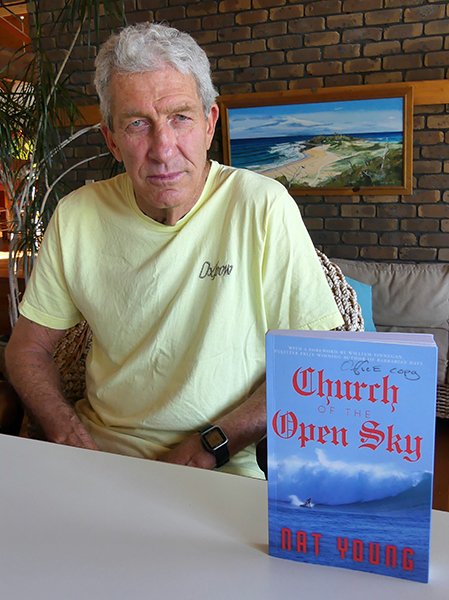 Nat Young finishes up a book tour at Revival in Coldstream Street Yamba on Sunday September 15. Kicking off at 5pm, he will talk about the book and his experiences and sign books purchased at the store. The Mexican will provide food for the occasion. Image: Geoff Helisma

What does one do when laid up in bed for a couple of months recuperating from a knee replacement? If you are Nat Young, you fire up the laptop, limber up your two best typing fingers, brush the cobwebs off the diaries you’ve kept since the age of 15 and write an 80,000-word manuscript titled Church of the Open Sky.

For those not familiar with Nat Young’s pedigree, he was the 1966 world surfing champion. Once upon a time he was called the ‘Animal’ or as William Finnegan, author of a definitive book about the surfing experience, Barbarian Days, writes in the foreword: ‘He wasn’t a humble, aw-shucks type.’ Finnegan doesn’t pull any punches either; rather than the usual gushing praise, he writes from a quasi literary critic’s perspective. However, anything less would have exposed Finnegan to accusations of wearing rose coloured glasses. The title of Young’s 1998 book, Nat’s That and That’s That, pretty well sums up the enigmatic Nat Young, who says he has “always enjoyed telling stories of our tribe”.

Young says he has “always enjoyed telling stories of our tribe”.

“Even when I was young I would retell the stories told to me by my elders,” he writes in chapter one. “It’s a part of surfers’ unique heritage that goes back to our bohemian roots, and I feel it should be preserved.”

The Independent caught up with Young at his Angourie home and asked a few questions.

GH: In chapter 1, ‘Surfing is not a sport’, you reflect on Tom Blake’s ‘amazing dissertation on the essence of what surfing meant to him’ saying, “It was titled ‘Nature=God: The Voice of the Atom’, and was a testament to his understanding of what surfing had become for him, transforming in his eyes from a sport to a religion.”

And yet, it’s virtually impossible to take sport out of the equation because surfing is basically competitive in its very nature – if not in a contest, surfers invariably compete against each other to catch the best wave, in fact you are notorious for doing just that – how do you reconcile that with surfing’s flirtation with the spirituality found by riding waves in the ocean?

NY: Competition is something everyone has to go through. Tom Blake went through it and wrote the phrase ‘church of the open sky’. As far as I am concerned competition is something that people should go through and come out the other side. I don’t have any answer to why surfing is qualified as a sport. If we can get our heads around the Tom Blake concept … the bigger picture being, [surfing is] a religion or an art form where all the people are of a like-mind. …We have another great thing … the ‘tribal’ tradition of paddling out and joining hands in a circle [to celebrate and remember a deceased surfer’s life].

GH: So it’s about history from your perspective, you retell your experiences with, and views about, surfing icons such as Miki Dora, Midget Farrelly and Bob Evans, as well as less prominent surfing pioneers such as Kevin Platt, Russel Hughes, Grant ‘Dappa’ Oliver and Bobby Brown. There are also chapters on copyright, the development of surfboards, surfing histories of the USA mainland and Hawaii, and stories of your experiences at various surf breaks and towns around the world.

While it is written from a very personal perspective, much like a memoir, it’s also like you’re an anthropologist of sorts, is that what you set out to do?

NY: I’m not sure about being an anthropologist, [but] the surfing tribe’s just got bigger and bigger; so for me to be able to sit back and write about some of these people who have basically been forgotten …

are an important part of our [surfing] history [and] I’m fortunate enough to write about those experiences; I still have my health (I’m really lucky to have that) and can surf every day.

GH: I’m curious about you keeping a diary; how did that come about?

NY: John Witzig gave me one in 1963 and told me to fill it up. John was my best friend and still is. I took him seriously; he gave me a beautifully bound red leather book. I wrote in it on the way to Hawaii [Young’s prize for winning the Australian title was an around-the-world air] and on the way home. I was just a surfer, there was no nine to five; I had plenty of time to write.