Surfers unite against drilling in the Bight 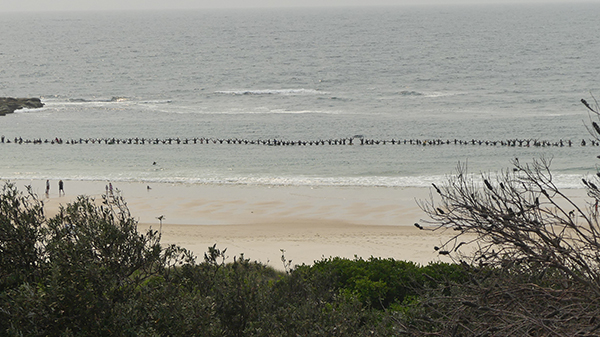 One hundred surfers joined hands, united in their opposition to drilling for oil in the Great Australian Bight

The protest was one of more than 50 that took place during a national day of action supported by the Surfrider Foundation Australia, environmentally-minded clothing compan, Patagonia and various activist/community groups around the county.

Former World Championship Tour surfer, Angourie’s Dan Ross, who is one of Patagonia’s surfing ambassadors, says the company donates “at least 1 per cent of [its] sales to hundreds of grassroots environmental groups all over the world”.

The previous night, the film The Head of the Bight was screened in Yamba, which its promo says “unites indigenous custodians, fishermen, scientists, surfers, and activists” against the threat of oil spills in the bight.

“At best, nothing goes drastically wrong and they rip oil out of the Bight for years; we continue to pollute and destroy our planet, a few people make some really good money out of it and it toxifies our fisheries.

“And at the worst… we’re all stuffed.”

It hasn’t been plain sailing for Equinor’s proposal, though.

On November 8, the Australian Government’s National Offshore Petroleum Safety and Environmental Management Authority (NOPSEMA] “issued a notice to Equinor requiring them to modify and resubmit their environment plan [for the third time] for proposed drilling in the Great Australian Bight”.

The drilling site is 372 kilometres south of the Head of the Bight and 476 kilometres west of Port Lincoln; the ocean’s depth at the location is between two and four kilometres.

The film’s other producer, surf journalist Sean Doherty, says, “This well would be 20 times deeper than most of the wells currently in production in Bass Strait.

“The danger here isn’t so much the depth though, it’s the remoteness.”

Activists have produced a map that models the maximum worst-case scenario, which shows a major spill could affect Australia’s coastline from the south west cape of Western Australia to Port Macquarie in NSW, including all of Tasmania.

“We ski, we swim, we surf, and we enjoy our own beautiful nature just as much as you enjoy yours.

“But we’re also passionate about energy, and providing the world with the oil, gas and renewables we all need — responsibly.

“For five decades we’ve been operating in deep waters and some of the harshest conditions on the planet.

“And in those nearly 50 years, not a single drop of oil from our operations has ever reached shore.

“We’ve spent years planning our operations in South Australia in the minutest detail.

“We know that we can explore safely.

“We also know how much your beautiful coastline matters to you.

“That’s why we’ll make sure this view will stay the same, forever. “NOPSEMA have requested additional information on our Environment Plan for exploring the Great Australian Bight, and we are currently working to prepare this.”