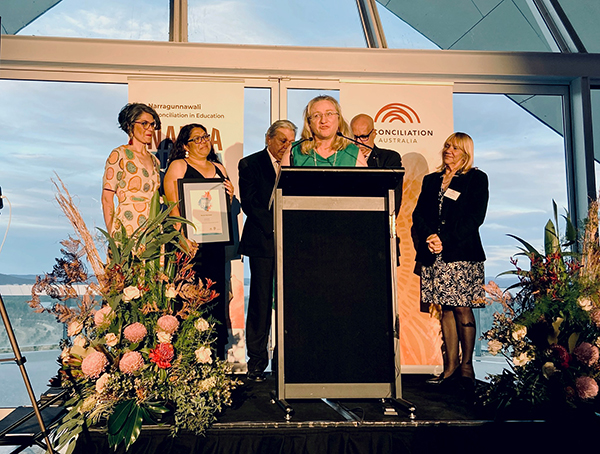 Tiny seeds can grow into the biggest of trees, provided they are in the right environment and receive the nurture they need.

Years ago, Maclean High School planted a seed of reconciliation; now it has been adjudged the leading school participating in the Australia-wide Narragunnawali: Reconciliation in Education program for schools and early learning services.

For the past 10 years, the school’s Year 7 students – indigenous and non-indigenous – have participated in cultural tours led by local Aboriginal elders, but that’s just one initiative.

Reconciliation Australia announced Maclean High’s win at an awards ceremony held on Ngunnawal Country on November 14 at the Margaret Whitlam Pavilion at the National Arboretum in Canberra.

Reconciliation Australia CEO Karen Mundine said Maclean won the school category award as a result of demonstrating its “enthusiasm for reconciliation and for developing deep, ongoing relationships with local elders and community members”.

“Our judges commented on a strong and shared enthusiasm for reconciliation felt right across the school – in classrooms, on the grounds and within the local community,” Ms Mundine said.

“There’s a real sense that Maclean High School is bringing others along with them on their reconciliation journey.”

Liza Hamilton, deputy principal and instructional leader of Aboriginal students at the school, said nominating for the award entailed preparing a reconciliation action plan (RAP) in the first term of the 2019 school year.

“After the plan was endorsed by Reconciliation Australia, we put in our submission, [which] addressed the criteria, ‘Respect, Relationships and Opportunities’,” she said.

“We cited examples of the cultural tours, the River of Learning teaching program [and] celebration day, the ongoing partnership with Macquarie University’s National Indigenous Science Education Program, our Desert Pea Media collaborations [music videos] and the Yarning by the River program run by Aunty Jo Randall.

“Other projects we have been involved in this year are the Close the Gap day, organised by Nungera; and the school ran its own NAIDOC program and celebration.”

Ms Hamilton said the school’s reconciliation initiative “began with the Aboriginal community telling the school that they felt their children were not being engaged”.

“After the elders came out of that meeting, [former] deputy principal Rhonda Pitson made it her mission to make things change.

“Even now, when retired, she still does a lot of work behind the scenes and, in particular, with our elders.

“The school has also formed an Aboriginal Education Consultative Group [AEDG], comprised of community members as well as a junior AECG, where our ATSI [Aboriginal and Torres Strait Islander] students elect their own students reps.

“The students deliver either Welcome to Country or an Acknowledgement of Country at each staff meeting and P and C meeting.

“Each year after the culture tours [to Brooms Head and Red Cliff] the kids love engaging with the elders and seeing things from an ‘existence and love of the land’ Yaegl perspective.

“Survey results show that some kids had never visited Brooms Head or had contact with an Aboriginal elder.

Ms Hamilton, Ms Warburton and Yaegl elder, Uncle Ron Heron, along with the other national finalists, also participated in a workshop about reconciliation, truth telling and the importance of reconciliation in education.

“This was facilitated by Reconciliation Australia and was held at the Yarramundi Cultural Centre on the foreshore of Lake Burley Griffin,” Ms Hamilton said.