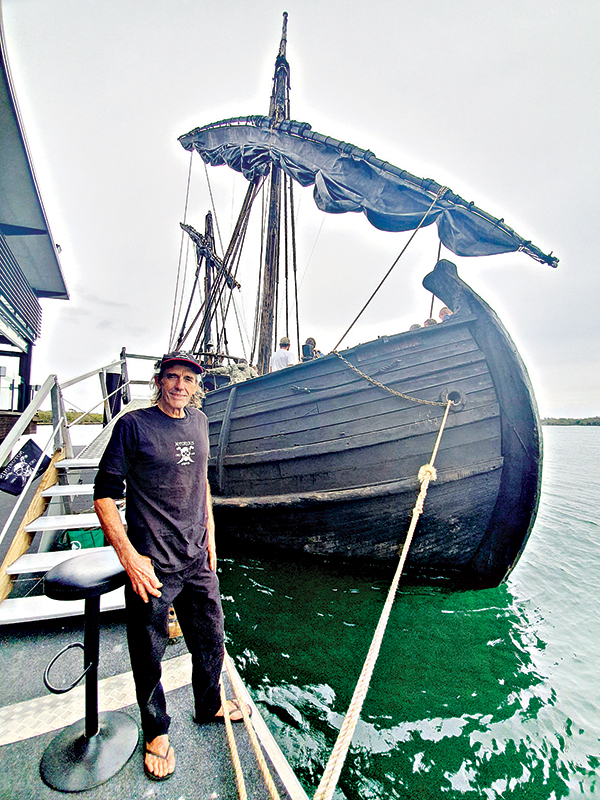 The Yamba Shores Tavern had a different looking boat moored at its pontoon over the long weekend.

The black, wooden ship ‘Notorious’ was open to the public to ‘come aboard’ and check out the Australian built Caravel (pirate ship).

The ship was built over several years, by owner Graeme Wylie (and his wife Felicite).

“It took two year’s just to research it as there were no plans – they didn’t use plans in the 15th century; they were all built by eye.

“They’ve never actually found the remains of a Caravel anywhere in the world, so they’re really a bit of an enigma.

“I spent about 10 years before I started building it, collecting the 300 tons of logs that it took to build it.

“The timber is Monterey Cyprus, native to California, planted in New Zealand from the mid 1800’s for ship building before they made their way as wind-break trees, to Victoria and Tasmania – which is where these logs came from,” he said.

Mr Wylie said that before building the ship, he had been a woodworker making furniture for about 10 years and already had a lot of the wood.

“I was burnt out and just looking for something more interesting to do,” Mr Wylie said.

“We built the boat in western Victoria and launched it at Port Fairy in 2011.

“Felicite and I have lived on it since then.

“We travel around in it up and down the coast from Hobart to Port Douglas and open it up as a museum vessel and that’s what keeps her all maintained and going along,” he said.

Mr Wylie said that the last chance to come aboard and see the wooden pirate ship will be at Corcoran Park in Grafton, this coming weekend.

“After that we’ll spend a couple of months heading south probably as far as Sydney – that will be cool enough for us,” he said.