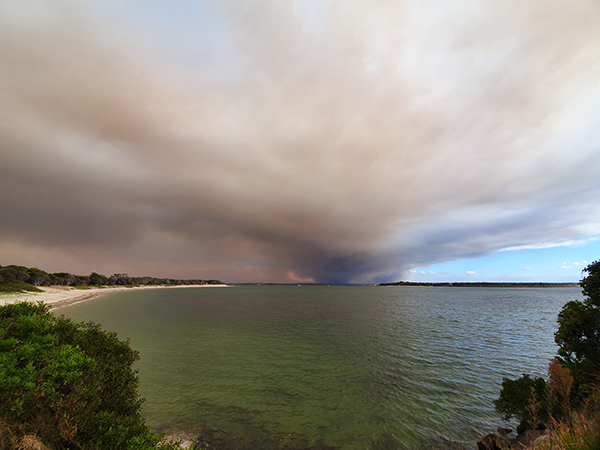 This photo of the fire was taken from Whiting Beach Yamba on Monday morning. An hour after this photo was taken, the NSWRFS sent out a sms message for the villages of Woombah and Iluka advising them to leave. The RFS air crew were kept busy on Sunday at Ashby Heights and Woombah area on Monday morning. Image: Lynne Mowbray

At the time of going to print the Myall Creek Road fire which has been burning out of control, had broken containment lines and warnings had been issued to residents of Woombah and Iluka.

“This fire is not in our area, it’s being managed by the Northern Rivers Fire Control Centre which takes in the area north of the Clarence River,” Superintendent Watts said.

“That fire started within the Richmond Valley and they maintain a management over that fire, until such times that it’s out.

“This fire is slowly progressing towards Woombah with the RFS issuing a ‘Watch and Act’ which has specific details attached to it.

Mr Watts said that the fire burning on Sunday at the back of Ashby saw a number of aircraft operating in the area.

“(At this stage) the fire is still burning north of Mangrove Creek, but it has burnt down as far as the top end of Gallagher’s Lane,” Superintendent Watts said.

“So people in that area should activate their bushfire survival plan and take advice from fire fighters on the ground.

“(In regard to the fires at Nymboida) the building impact assessment teams are still working in the area and more details will come out in due course.

“Elsewhere in the valley we still have quite a fair bit of active fire in the Washpool bush fires to our west that has burnt into the Tenterfield Local Government area and also quite active in the upper reaches of the Coaldale Valley – so we’re still doing work there.

“The Kaloe Fire we’re doing some back burning to the south of Ramornie and we’ve still got a fire burning up around Mulligan’s Hut at the top of the range and that goes into the Glen Innes Local Government area.

“The Liberation Trail Fire is looking pretty good in the Clarence Valley.

“We’re still stitching a few pieces up in the Coffs Harbour Local Government area and we expect to have that fire contained in the next four to seven days.

“For the latest fire updates, people need to keep an eye on the RFS ‘Fires near Me’ app.

“The blue diamond is the “advice” stage, which is updated twice a day, but if the weather changes of the fire makes a move a new situation will be established which means new messaging that would be issued to the community.

“I’d just like to say that the volunteers are doing a fantastic job.

“The local resources are recovering from a three week fire fighting campaign; they’re coming back on line and still being supported by interstate fire fighters from the Country Fire Authority in Victoria.

“There’s a lot of donations coming in and it’s great to see the community band together,” he said.

At the time of going to print the RFS had upgraded the Myall Creek fire to Emergency and were in the process of advising the residents of Woombah and Iluka to leave the area and head to the evacuation centre at Maclean.