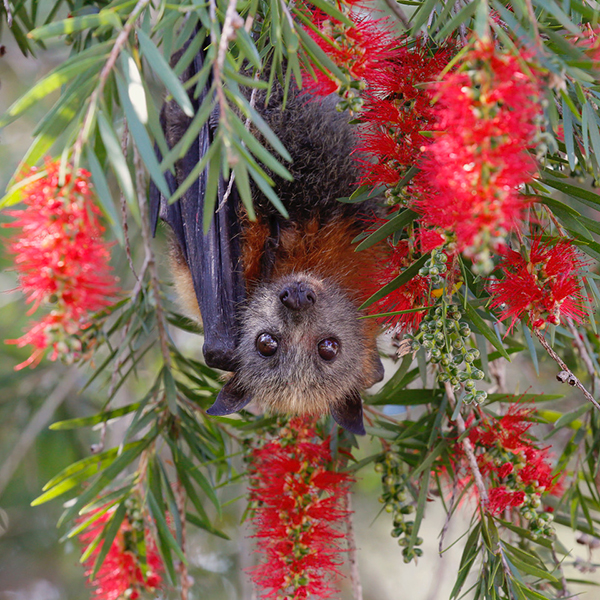 This greyheaded flying-fox 'camped' in a tree at Gulmarrad, most likely disorientated as a result of a combination of drought and fires. Image Graham Dowsett

Over recent weeks, just before and following the fires, there has been a significant reduction in the number of flying-foxes inhabiting the Maclean camp, which extends from the rainforest remnant within Maclean High School’s grounds to the gully near the Cameron and Jubilee streets intersection.

Flying-fox expert Dr Billie Roberts, whose work was an integral part of completing the camp’s management strategy, said the reduction in flying-fox numbers was “due to the drought and recent fires”.

“Flying-foxes in the region have migrated elsewhere for food, some finding new homes while roosting and feeding in backyard trees,” Ms Roberts, a spokesperson for the Department of Planning, Industry and Environment (DPIE), said in an emailed response to the Independent’s enquiry.

“Unusually, some are exhibiting irregular behaviours such as flying around during the day.

“There have been reports of flying-foxes settling at new food sites rather than returning to their colonies in the region.

“[The] DPIE advises that if you see a low-hanging or sick flying-fox, to avoid touching the animal and, instead, contact your local licensed wildlife group [www.wires.org.au 1300 094 737].”

Meanwhile, Clarence Valley Council (CVC) has issued a media release saying that people “in the Clarence Valley and greater north coast New South Wales may notice some unusual behaviour occurring among the flying-fox (fruit bat) population at the moment”

“The flying-foxes have been observed flying around during the day, roosting in tree species that they would normally not inhabit, particularly in urban backyard fruit trees, and many are falling out of trees or dying in situ.

“Some individuals are refusing to return to their colony and … staying near a food resource to protect it.

“The unusual behaviour is linked to malnourished bats undergoing starvation.”

Clarence Valley Council’s resource management project officer, Dr Caragh Heenan, said that food shortages “can often occur at the end of the winter period on the east coast, but the drought conditions and extensive wildfire this year have exacerbated the situation”.

“Floral resources are in short supply and this is leading to a reduction in the weight of individuals, and, in some cases, they cannot cope – they are starving to death,” Dr Heenan said.

Flying-foxes can carry Australian Bat Lyssavirus (ABL), so any exposure via a bite or scratch could lead to infection.

In the last month, 10 people have been bitten or scratched after handling bats across the Mid North Coast and Northern NSW local health districts.

Assistant director of the North Coast Public Health Unit, Greg Bell, said that residents are advised against handling or touching any injured or dead flying-foxes.

“If you are bitten or scratched by a flying fox or bat, immediately wash the wound gently but thoroughly with soap and water, apply an antiseptic and consult a doctor as soon as possible to assess the need for further treatment,” Mr Bell said.

For more information, visit CVC’s flying-foxes in the Clarence Valley engagement webpage, clarenceconversations.com.au/flyingfoxes, which “is aimed at communicating with the public regarding flying-fox camp management, as well as informing residents about the development of management guidelines for local camps”.