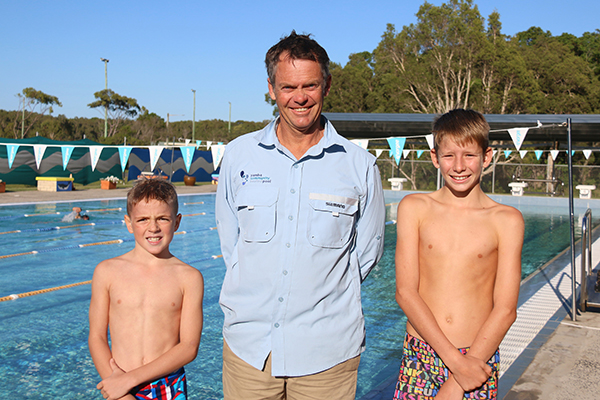 Yamba swimmers (left) Kydan Jones 9 and Beau Edwards 11, with their swimming trainer Richard Beresford, after their morning training session at the Yamba Pool. The boys are part of the Diocese of Lismore Catholic Schools polding team which was to compete at the Sydney International Aquatic Centre on Wednesday, March 25, which has been cancelled due to the Coronavirus. Image: Lynne Mowbray.

After qualifying to swim at the Catholic Schools Championships in Sydney this week, two students from St James Catholic Primary School in Yamba are disappointed, after the event was cancelled due to Coronavirus.

The two boys were part of the Diocese of Lismore Catholic Schools polding team (all Catholic Schools in the northern half of NSW) which was to compete at the Sydney International Aquatic Centre on Wednesday, March 25.

Beau Edwards 11 and Kydan Jones 9, have been training for the event at the Yamba Pool, three to five mornings each week before school.

School captain Beau who had qualified in the 50m breaststroke, said that it was a bit disappointing that the event was cancelled due to the Coronavirus.

“I was really excited to be going, but (unfortunately) it just couldn’t happen,” Beau said.

“Next year I’ll be in high school and I’ll try hard and see what I can do to qualify again,” he said.

Last year, Kydan was the only student from his school to go through to swim at State level.

Kydan said that last year he felt really good because he qualified and got to compete in Sydney.

“I’m pretty disappointed this year, because it was going to be my second year.

“I’m going to keep training and try to beat my PB (personal best) of 37 seconds, in the 50m freestyle.

Yamba swimming trainer, Richard Beresford said that has been training the boys since August last year.

“Since then, they have been steadily getting fitter and faster heading towards their schools State Championships, which unfortunately has been cancelled,” Richard said.

“They were still keen and going well.

“Unfortunately, the virus has affected all the sporting facilities and the major aquatic centres have shut down, so there’s no swimming (Championships) this year,” he said.