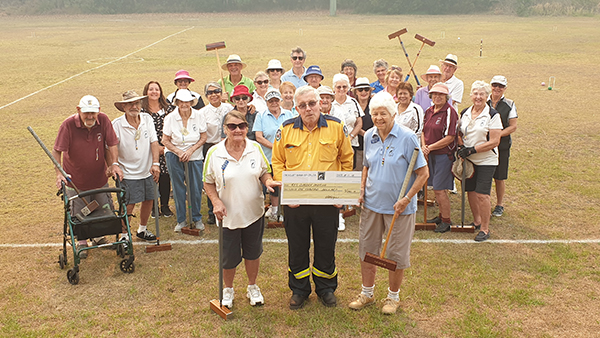 “We thought we’d like to do something for the firies who help keep us all safe,” says the croquet club’s group leader, Ros Higgins.

“They’re all volunteers and it costs between a thousand and $2,000 a day to feed them, including the ancillary services attending the fires.”

Woodford Rural Fire Brigade member Alan Woods, who heads the catering brigade at Trenayr, says the kitchen has been feeding “at least 300 people a day” during the current fire emergency.

“We’ve been here, not always daily, since about July,” he said.

“We had [some time off] for a week or two after the Shark Creek fire [in early September], but it’s been continuous since then.”

Mr Woods said between eight and 14 catering volunteers have since been preparing food each day.

“As long as there are fires, we are catering for the volunteer fire fire-fighters and support people who help out,” he said.

The club, which has nearly 70 members, plays each Tuesday and Friday at its field beside the Raymond Laurie Sports Centre in Yamba.

People interested in joining the croquet club can call Ros Higgins on 6646 0235 or just turn up on Tuesday or Friday mornings.

“We play purely at a social level,” Ms Higgins said. “Anyone who plays croquet can come for a social game.”