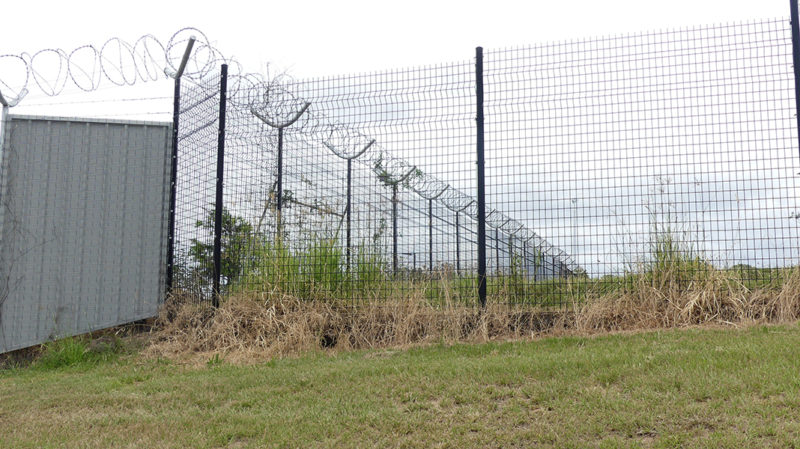 The razor wire on top of the fence that surrounds Clarence Valley Council’s new depot at South Grafton is a contentious issue for the part along South Grafton High School’s boundary. Image Geoff Helisma

The budget variation was tucked away in the July monthly financial report tabled at the meeting: “Remove razor wire on adjoining fence … and erect new security fencing parallel to existing.”

Adding to the staff’s recommendation to receive and note the monthly report, Cr Karen Toms moved a motion to defer the proposed general fund variation to the September Corporate, Governance & Works Committee, to allow councillors to inspect the existing fence on the day of that meeting.

“The razor wire is an issue, I don’t like it either,” she told her fellow councillors.

“The proposal is to build a parallel fence

inside of the existing fence and remove the razor wire

[from the existing fence]

She said she had visited the site and wanted councillors to have a look before spending money “on a second fence inside our own property”.

She said she would be “happy to just to take the razor wire off”.

“This is a lot of money,” she said, “we’re trying to be frugal and, in my opinion … it is ridiculous to build another fence.”

Responding to a question from Cr Arthur Lysaught, who asked if it was an occupation, health and safety issue, general manager Ashley Lindsay said: “It’s an issue that the Department of Education has approached council about, with a policy that states that they don’t have razor wire on their school fencing.

“They haven’t been able to provide that [policy] to us but, nevertheless, we are addressing that request … to move the razor wire off the fence.”

The issue first came to light in February 2018 soon after school resumed from its break.

At the time, the Department of Education and Training advised the Independent that the “razor wire

possibly encroaching [school property] on the top of the … security fence for a short section where the school’s agriculture plot borders the council depot”, and that it was “consulting [with CVC] to ensure any fencing is appropriate to the boundary”.

The development application [DA] did not specify how the fence would be treated for security purposes, apart from nominating its height, 2.4 metres.

The DA states: “A number of street trees will be planted … to provide a barrier between the new works depot, the road and adjoining properties.”

The DA’s ‘Context, Setting and Streetscape’ section states: “With appropriate boundary landscape treatment, it is anticipated that there will be no significant visual impact on the residents in Tyson Street or visitors to the school.

“…The proposed development is unlikely to adversely impact on the existing semi-rural amenity and available rural views currently enjoyed by nearby residents and road users.”

On the issue of security, after considering the Socio-Economic Indexes for Areas (SEIFA) score from the 2011 Census and data from the NSW Bureau of Statistic, the DA states “crime rates in South Grafton are considered low overall”.

“Crime types that may affect the proposed development are theft and malicious damage to property.

“The area of South Grafton scores relatively low for theft and medium for malicious damage.”