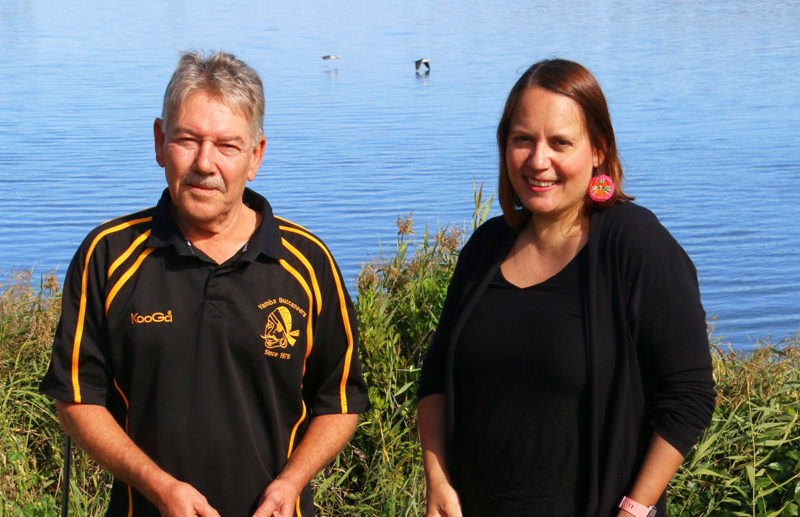 The Yamba Buccaneeers Rugby Club has commissioned Yaegl artist Frances Belle Parker to create and design an artwork for an Indigenous jersey for their club.

An unveiling of the artwork entitled “The Stone Canoe”, took place on Friday in Maclean, on the edge of the Clarence River.

President of the Yamba Rugby Club Andrew Bennett said that the implementation of an Indigenous jersey was something that had been discussed for a number of years.

“It’s to show that we are one community and in the past I don’t think that it has been properly acknowledged, both by the club and the wider community,” Mr Bennett said.

“We want to make it inclusive and see it valued and that’s why we’ve taken time.

“I’ve spoken to (the) Elders in regards to the design of the jersey and different things.

“The plan at this stage is that hopefully the jerseys will be with us in time for NAIDOC Week this year. On the draw we are playing at home on the Saturday of NAIDOC Week and I’ve had preliminary discussions about the Elders presenting the jerseys to the players on that day.

“To me it’s a natural progression of where our society’s leading.

“The jersey will be worn on special occasions such as NAIDOC Week and if we make the finals, the players will then get a choice of playing in our normal playing jersey or the Indigenous jersey; I think I know which one they’ll choose.

“We’ve had a long history of Indigenous players representing Yamba and this is just acknowledging the importance that our Indigenous culture plays in this area.

“We decided to do the unveiling of the artwork in Maclean, because we are a Lower Clarence team as such, even though we’re called Yamba, and I think it’s the linkage between the two communities and the river behind us signifies Frances’s art work,” he said.

Frances said that she created her artwork design “The Stone Canoe” based on the dreamtime story, of the Stone Canoe (and its journey down the river).

“It’s a very important part of the dreamtime story for us Yaegl people,” Frances said.

“As an artist, I do so much outside of the community, so it’s nice to actually come back in and do projects that are more community focussed.

“Andrew wanted something that captured Yamba and the region, and “The Stone Canoe” was the one thing that stood out to me,” she said.

The Buccaneers will be auctioning off the ‘framed’ original art work by Frances Belle Parker, to raise money to support junior rugby. The date for the auction has not been decided as yet and details of the auction will be announced via the Buccaneers Facebook page.