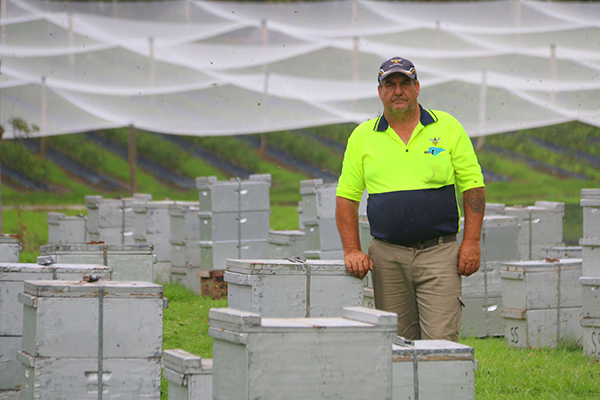 Clarenza beekeeper Steve Fuller with some of his remaining beehives. Steve and his brother Wayne operate one of the State’s largest honey producing businesses and have just lost around 95 per-cent of their National Parks leased bee sites, due to the devastation caused by the recent bushfires. Image: Lynne Mowbray.

Local beekeepers have suffered extensive losses, due to the recent bushfires.

‘Bee Services’ at Clarenza is a family run business owned by brothers Wayne and Steve Fuller and has been operating for the last 42 years.

Steve said that the business has built up over the years to become a massive operation and is one of the largest (honey producing) businesses in NSW.

“Most of the honey we produce is for Capilano and we are one of Capilano’s largest ‘organic certified’ suppliers,” Steve said.

“We cannot produce enough honey; that’s how clean our honey is. Every time we produce honey Capilano want it and it goes all over the world,” he said.

Steve said that before the drought and the fires impacted on the business, they were running around 3000 hives.

“During the fires we lost just under 500 hives to actual fires and then another 500 to 600 to failing queens (the queen bees died due to the stress caused by the fires),” he said.

‘Bee Services’ lease their (bee) sites from National Parks and the sites are certified, by Australian Organics.

“These sites can be an hour and a half’s drive into the bush and this is where the problem comes in with the fires,” Steve said.

“We can’t get in there when there are fires around, because if something happens, we can’t get out. So that’s why we lost so many hives.

“Some of the fires were spotting 30 kilometres in front and you could have embers going over you and the next minute you find the road blocked off when you’re trying to get out.

“We had a lot of bees up in the Gibraltar Range National Park and they closed the road (due to the fires) and so we couldn’t get in to save the bees.

“Our fuel bill is still the same because we have to go back in and clean the sites up. Money is still being spent, but we’ve got no money coming back in,” he said.

Steve said that they have no way of predicting how long it will take to recover from the bush fires.

“Some of the land is going to bounce back in 18 months – maybe two years, but we believe it will be a minimum of three to five years, before we’re producing what we used to.

“We can’t just go and put our bees anywhere in a National Park, we can only put them in the allocated sites; so, we are working with National Parks (regarding other possible sites).

“At the height of the bushfires I had 600 hives at my property (at Clarenza) and 400 hives on Wayne’s property, at Pillar Valley. The reason being, we were moving bees that much (to try and get them away from the fires) that we were killing them. We couldn’t keep in front of the fires any longer, but we could defend our properties here – so we had hives everywhere.

“The little bit of honey that the bees are producing at the moment, we are leaving on the bees, so they’ve got food and we don’t stress them by (robbing them and) taking it off them. We’re letting them settle and not overworking them, to be kind. The main thing is to keep them alive.

“The impact of the bushfires is turning the whole bee industry in a different direction now. Anyone that’s a professional beekeeper may have to travel further (western NSW or Queensland), to find new sites.

“I know some beekeepers around Port Macquarie who have lost almost 100 per-cent of their hives; they don’t want to go back into business – it’s just too stressful,” he said.

Steve said that as a community, we can all do our bit to help out.

“The community can help by buying Australian honey,” Steve said.

“There is a ‘bush fire’ honey in a squeeze pack which is produced by Capilano which donate about 20 per-cent I think, back to the beekeepers and that really supports us.

“Another thing that a lot of people don’t realise is that with a lot of large commercial bee keeping enterprises, is that they do have employees.

“We’ve managed to keep ours on, but if I have to give them time off, then that’s going to ripple back through the community because they don’t have wages or money to spend and that’s the same with farmers overall,” he said.