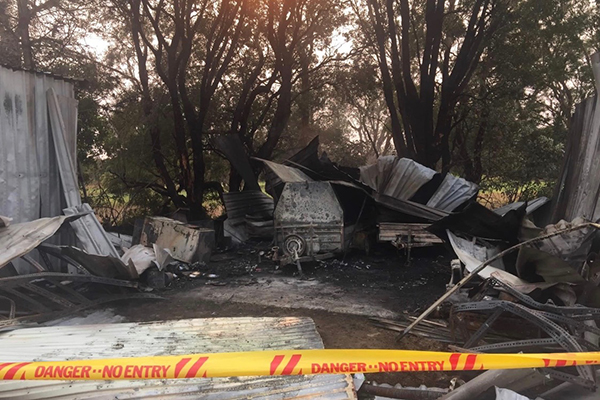 The sheds, owned by Yamba Lions and Yamba Rotary clubs, are located on land near the Yamba sewerage treatment plant and the south western edge of the Yamba golf course.

“The incident is earmarked for an investigation by crime scene investigators,” Sgt Williams said, “to confirm whether or not it was a deliberate act.”

He said Fire and Rescue NSW investigators will assist police.

“Based on their findings we will decide how to manage the ongoing investigation,” Sgt Williams said.

The alarm was raised at approximately 11.50pm on Friday November 22.

“A witness contacted 000,” Sgt Williams said; “at that stage it was thought it might be a scrub fire, [however, fire-fighters] arrived to the Colorbond sheds on fire.”

Sergeant Williams said the sheds are not connected to electricity, which rules out the fire starting as a result of an electrical fault.

“It’s a devastating blow for the two community groups,” he said.

Yamba Rotary’s secretary Rick Angelo said his club’s biggest loss, apart from the shed itself, was their barbeque trailer and “signage, banners, poles and road signage for events and audio equipment”.

“We are planning to rebuild the shed, at a cost we don’t know yet,” Mr Angelo said.

“We do have some insurance cover, but we’re not exactly sure what’s covered at this point.

“We’ve had a lot of offers of interim equipment from citizens and other Rotary clubs.”

Yamba Lions secretary Gordon Saunders said his club’s greatest disappointment was the loss of their merry-go-round and train, both of which have been in service for decades.

“We had heaps of bookings at schools over next few weeks for their Christmas parties,” Mr Saunders said.

“Working at the markets yesterday, a lot of adults remembered riding on the merry-go-round and train.

“We feel for the guys in the men’s shed [in Townsend] who totally refurbished the merry-go-round years ago.

“It was a huge job; and to see their work burnt … I feel for those guys.

“But life goes on, like everything else, and we’ll continue to do what we’ve always done.”

Meanwhile, Yamba resident Mark Pirie, who is not a member of either club, has started a gofundme web page – ‘Rotary Club Yamba’ – seeking support from the community.

Mr Pirie writes on the page: “The storage sheds … were completely destroyed by fire…

“Equipment for staging events along with other items used for fundraising have all been lost.

“The Rotary and Lions clubs have helped so many families and individuals, including my own family.

“They kindly funded our son’s expensive science trip while he was at Maclean High.

“This in turn had a snowball effect, which ultimately led to our son attaining a fantastic career as an engineer, which he loves.

“…I’m hoping we can all chip in a little and give back to two great organisations.

“…Thank you in advance for your donations.”