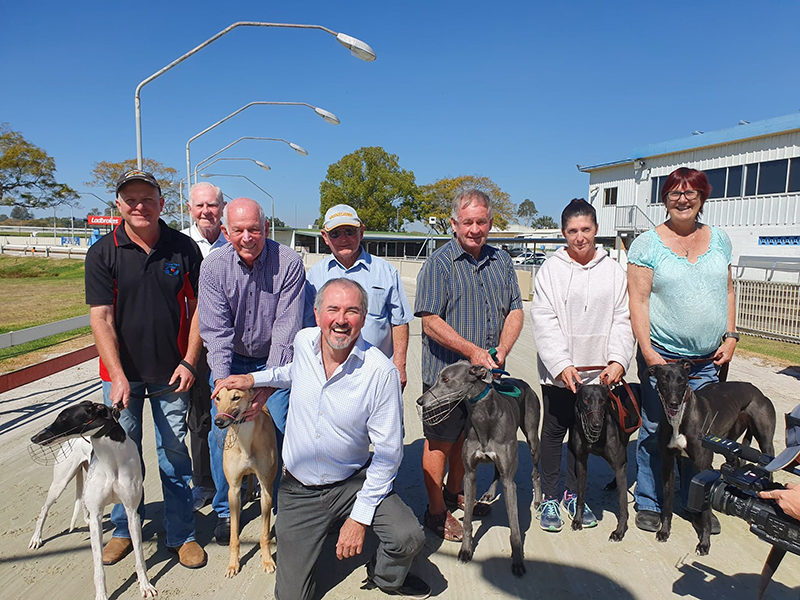 Greyhound owners were pleased when Clarence MP Chris Gulaptis (front) announced that the Grafton track will soon undergo a $4.6 million redevelopment, including a “newly built track with a safer shape and size, the installation of safety railing, upgraded LED lighting, a new irrigation system and a kennels complex”. Image: Contributed

He said the project will include a “newly built track with a safer shape and size, the installation of safety railing, upgraded LED lighting, a new irrigation system and a kennels complex”.

In 2016, then premier Mike Baird Mike Baird (Liberal) and then deputy premier and minister for racing Troy Grant (Nationals) announced on July 7 that the NSW Government was “acting to protect animal welfare as a priority, and is planning for an orderly industry shutdown as of 1 July 2017”.

Mr Gulaptis rebelled against this move, ‘crossed the floor’ and voted against banning the industry.

“I think it’s devastating for the owners, trainers and breeders and I think it’s making an assumption that everyone in the industry has done the wrong thing – I disagree with that assumption,” he said at the time.”

“Greyhound racing was on its knees a few years ago and we gave a commitment to industry that we would help make tracks safer for racing dogs and secure the sport’s future,” Mr Gulaptis said last week.

A key recommendation of the panel was the establishment of the Greyhound Welfare and Integrity Commission (GWIC), which now oversees the industry.

The commission put out a media release on August 19 that outlines what it has done during its first 12 months of operations.

“It has processed more than 22,800 transactions and taken more than 18,000 phone calls from participants.

“As part of the recent process to renew registrations, over 4,300 participants have made a conscious decision to remain in the industry.

“Over the past 12 months, another 260 individuals have also entered the industry for the first time, and over 350 individual breeders in NSW have made decisions to breed more than 500 litters and 3,747 pups.”

“Of the kennel inspections undertaken, the commission’s inspectors issued 55 welfare notices and assisted those participants to meet their requirements,” the media release states.

“…In its first 12 months more than 350 welfare and integrity concerns have been reported to the commission by members of the community.

“Of these 280 have been subject to some form of regulatory response, which could be an inspection of kennels; advice to participants on how to address health or welfare issues with their dogs; and in some cases, disciplinary action.”

The commission, which came to be “because the previous model of industry self-regulation failed”, is also responsible for the welfare of retired greyhounds.

The Grafton Greyhound Racing Club project is expected to begin in November and take around five months to complete – it is part of the government’s $30 million, five-year Greyhound Racing Capital Grants Program “to improve safety and boost animal welfare standards at racetracks across the state”.